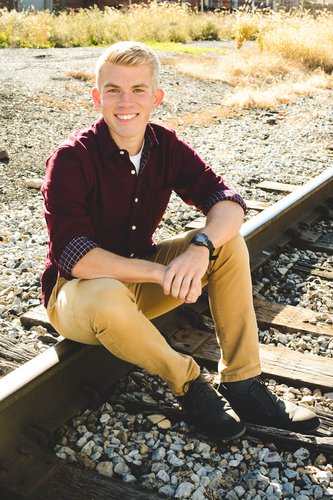 Jonathan Jay Acklin was born on September 30th, 2000 to Tim and Cindy Acklin. He has two siblings: a twin sister, Anna, who attends Temple, and an older sister, Rachael, who graduated from Temple in 2016.

He has attended Temple since K4. Jonathan has also taken part in a number of extracurricular activities, including band since the 5th grade, stage crew for Fiorello, stage manager for Anchors Away and Little Women. He played the roles of a dancing waiter in Hello, Dolly and Keefer Mahart in The Trouble with being Tucker Dowt. He also plays soccer, baseball, and basketball. Jonathan is the Student body President, and the National Honors Society treasurer. His favorite parts of high school are getting to spend time with friends, having the opportunity to succeed in school, and forming bonds between his teammates. He currently attends Lima Baptist Temple. Jonathan’s favorite Bible verse is Psalms 112:4, “Even in darkness light dawns for the upright, for those who are gracious and compassionate and righteous.”

After high school, Jonathan plans on attending Lake Superior State University to major in fire science. He hopes to become a fireman and eventually a chief. He also aspires to hold a leadership position in his church, to raise a loving family, and to continue to grow as a godly man. If he could choose one celebrity to spend a day with, Jonathan would choose Louie Giglio: the pastor of Passion City Church in Atlanta, Georgia, so he can learn from him. Jonathan says, “ He is a great leader and an influence to thousands of people.”

Jonathan’s advice to underclassmen is, “Get serious about your faith. When it’s all said and done, you’re going to realize that it is the most important thing in life.” The aspects of Temple that have affected his life the most is the “high standards and expectations” that he is held to by his teachers, coaches, and peers.

May God bless you on your future endeavors, Jonathan!